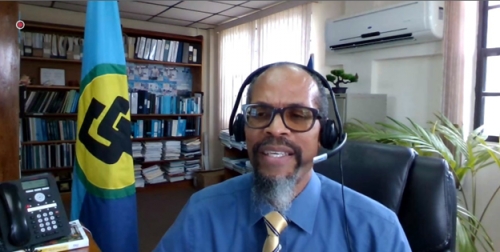 "Climate change and ocean acidification pose significant threats to fish production on top of the many other pressures, such as overfishing, habitat degradation, pollution and invasive species—all undermining our food and nutrition security..."

The Executive Director of the Caribbean Regional Fisheries Mechanism (CRFM), Mr. Milton Haughton, has underscored the need for access to financing and technology in addressing the threats which climate change pose to Caribbean fisheries and aquaculture. In addressing the Latin America and the Caribbean Climate Week 2022 (LACCW) side event in July on Anticipating climate risks and preventing disaster: climate resilient development pathways in Latin America and the Caribbean, he emphasized the need to build partnerships as well as capacity at the local and community levels. He also spoke of the need to pursue an integrated approach to implementing and mainstreaming the best practices developed over the years to improve resilience and empower coastal communities.

Mr. Haughton expressed concern that adverse climate change impacts will inevitably result in reduced availability of fish for local consumption and export—compounding the threats that already confront the fisheries and aquaculture sector.

"Climate change and ocean acidification pose significant threats to fish production on top of the many other pressures, such as overfishing, habitat degradation, pollution and invasive species—all undermining our food and nutrition security," he stated.

The CRFM Executive Director also stressed the need for CRFM Member States to take the whole-of-government approach, rather than a siloed approach to combating these myriad challenges and threats arising from climate change. The Caribbean Community (CARICOM) has placed a high priority on supporting climate change adaptation and mitigation, as well as disaster risk management across the Community. In this regard, in 2005, the CARICOM Heads of Government established the Caribbean Community Climate Change Centre (CCCCC). The CRFM maintains a close partnership with the CCCCC as well as the Caribbean Disaster Emergency Management Agency (CDEMA), in addressing adaptation to climate change and disaster risk management in the fisheries sector. Furthermore, the CRFM works closely with several other key partners, including Member States, donors, local civil society and NGOs, to develop and implement best practices. 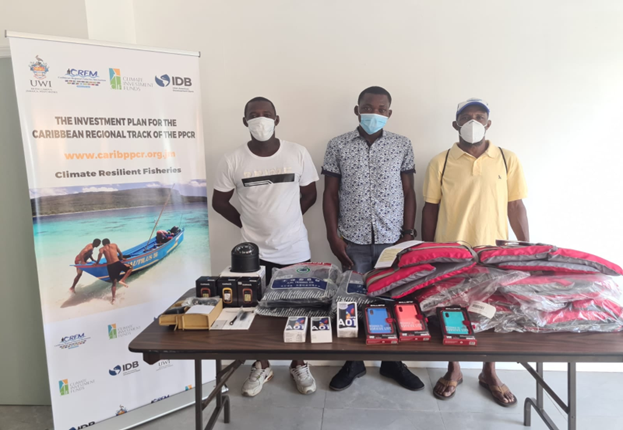 Fisherfolk in Saint Vincent and the Grenadines received equipment obtained through the CRFM Secretariat under the CIF/IDB Pilot Program for Climate Resilience - Caribbean Regional Track.

He also highlighted several projects that the CRFM has been involved with, which address the issue of climate change. These include the Climate Change Adaptation in the Eastern Caribbean Fisheries Sector Project (CC4FISH) and the Caribbean Fisheries Co-management Project (CARIFICO), which promoted the development and deployment of Fish Aggregating Devices (FADs) capable of withstanding category 5 hurricanes, thereby reducing damaging impacts to the environment, including ghost fishing.

The CRFM was also integrally involved in the IDB Pilot Program for Climate Resilience (PPCR) - Caribbean Regional Track, which was funded by the Climate Investment Fund (CIF). The CRFM Secretariat coordinated the marine sub-component of the Regional Project, which was executed by the Mona Office for Research and Innovation (MORI) at the University of West Indies, Jamaica. The CRFM coordinated the development and testing of the Fisher Early Warning and Emergency Response (FEWER) Moobile App in collaboration with UWI. The CRFM is partnering with CDEMA, in an effort to expand the reach and uptake of this tool and scale up its benefits across the region.

The CRFM has also supported the expansion of the Caribbean’s Coral Reef Early Warning System (CREWS) Network , through which stations have been installed in some Caribbean countries with support from the CCCCC.

The most recent initiative of the CRFM is being implemented in partnership with the Government of New Zealand through Plant and Food Research Limited. The Sargassum Products for Climate Resilience Project seeks to turn the large swaths of Sargassum seaweed that have been inundating Caribbean beaches and coastal waters annually since 2011, into commercially viable products that would provide new opportunities for enterprise, livelihoods, employment and economic growth.

To access the body of CRFM documentation on climate change adaptation and disaster risk management, visit the CRFM Portal . You can also register to become a member of the portal.

More in this category: « Focus on IUU Fishing and Transnational Organized Crime in the Global Fishing Industry
Login to post comments
back to top